Today, we are going to help you pick the best lightweight cooler for your needs.

That’s when injection-molded coolers come in. If you are looking for something lightweight yet high-performance, these coolers tick all the boxes.

Below, we’ll explain how these coolers differ from rotomolded coolers and showcase the best light coolers to hopefully help you choose one.

Injection-molded coolers perhaps can’t compare with rotomolded coolers in terms of durability, but this doesn’t mean that they can’t take a hit. And most importantly, they are much lighter!

There’s a third technology as well – blow molding. Blow molded coolers are even lighter than injection molded ones, but they have worse longevity and insulation.

When picking coolers for our top, we’ve mostly focused on finding light coolers that perform well. Due to this, most suggestions in this post are injection molded coolers, and there’s also one blow-molded cooler – the Igloo BMX – because we found it good enough for this post’s purposes.

In rotational molding, powdered resin or plastic is poured into a hollow mold. The powder is heated and rotated horizontally and vertically, which allows the material to melt and distribute along the surface of the mold.

In injection molding, hot plastic is injected under pressure into a shaped mold. As the plastic cools down, it solidifies and takes the mold’s shape.

This distinction in the manufacturing process implies dramatic differences between injection and rotomolded coolers.

First of all, the injection-molded coolers are not comprised of a single mold. Instead, the large, molded pieces are tied together.

Furthermore, one technology is better in some areas and worse in others.

So, the advantages of injection molded coolers over rotomolded ones are as follows:

There also are some important disadvantages in injection molded coolers that you should know about:

We also didn’t talk about one key thing – insulation. Well, insulation is comparable in rotomolded and injection molded coolers, so you won’t be sacrificing insulation by opting for a light ice chest.

All in all, injection molded coolers are 30-40% lighter, cheaper, can be of more sophisticated designs, and offer insulation that’s on par with rotomolded coolers. 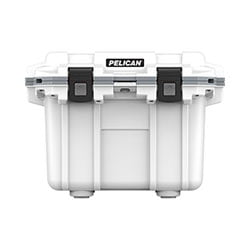 Pelican is a respected brand whose coolers are known for their excellent ice retention, durability, and lifetime warranty coverage. The Pelican Elite line boasts some of the best rotomolded coolers on the market as well.

However, not everybody knows that some Elite coolers are actually injection molded – those are 20QT, 30QT, 50QT, and 70QT coolers.

The weights of the Elite injection-molded coolers are as follows:

Another thing that the injection molding allows in these coolers is multi-color designs. You won’t find anything like this in rotomolded coolers.

Pelican Elite injection molded coolers have a few features that are also found in rotomolded coolers, including a fish ruler, a bottle opener, cup holders, and a drain plug. So the listed Elite coolers are not only light but also pretty convenient.

The latch design is also interesting in Pelican Elite coolers. They are push & pull latches that are kept in a locked position not by tension (like with rubber latches) but by molded keepers. The latch is released once you push the latch button. This design may allow for more secure locking than with rubber latches.

It’s also nice that Pelican coolers are made in the US, and they are covered by a lifetime warranty too despite not being rotomolded.

You can’t go wrong with Pelican, but their coolers are pretty expensive. The 50QT cooler, for example, is 30% pricier than the Igloo IMX cooler below and 50% more expensive than a similarly sized RTIC cooler, which is also on this list.

Check them out at Pelican' store >>

Here is the video showing Pelican Elite 20. Note how tall this cooler is – just enough to hold bottles of wine in upright position. Most coolers can't do this. As of this review, RTIC 52 from the Ultra-Light line was the latest release of RTIC.

RTIC 52 Ultra-Light also was the only cooler in the line – perhaps RTIC has released this cooler to test the waters and see how people react to their injection molded coolers?

Nonetheless, RTIC 52 Ultra-Light is a pretty interesting cooler that’s likely to be the best lightweight cooler for many people.

Notably, RTIC 52 is lighter than the comparable Pelican Elite 50QT – 20 vs 26.39 pounds at nearly the same capacity (52-53 quarts). The RTIC cooler is also 30% lighter than its rotomolded counterparts.

Elite 50QT is more expensive and may have a more durable build, which may explain its heavier weight, but if you do want a very light ice chest, then RTIC 52 Ultra-Light may be optimal.

RTIC 52 Ultra-Light retains the features of its rotomolded counterparts. You are getting the Rapid V-Drain system, marine-grade rope handles, molded tie-down slots, rubber T latches, bear resistance (albeit without IGBC certification), and a traction lid that may be used as a casting platform or even a cutting board.

But more importantly, RTIC advertises ice storage duration of up to 10 days – just like in rotomolded RTIC coolers.

We also like that RTIC 52 Ultra-Light retains the design of its rotomolded counterparts. This cooler boasts beautiful simplicity that is reminiscent of YETI coolers. Well, this isn’t surprising since RTIC competes against YETI and is known to make very similar coolers at a much lower price.

Speaking of price, RTIC 52 Ultra-Light costs a mere $149.99 (as of this review), which is half the price of Pelican Elite 50QT. Although the lower price may imply lower durability and longevity, RTIC 52 Ultra-Light is an excellent deal given the features you are getting.

Check this cooler in RTIC's store >> IMX coolers are rather inexpensive too, but this may be partly because they apparently aren’t made in the US – they aren’t listed among US-made Igloo coolers.

As of this post’s writing, the IMX line had two sizes – 24QT and 70QT. They offer very similar benefits and features, but their capacities and weights are obviously drastically different. The 24QT cooler weighs 16.01 pounds and the 70QT 25.8 pounds.

Note that the small cooler is heavier than the comparable Pelican Elite 20QT cooler, while the 70QT is about 7-8 pounds lighter. The IMX 70QT is also advertised to be 40% lighter than a rotomolded cooler.

Ice retention-wise, IMX coolers are decent – we have no numbers on 24QT (Igloo doesn’t provide them), but we’ve tested 70QT and know that it holds ice for up to 5-6 days. This is a little lower than the advertised 8 days, but it’s pretty good.

The IMX coolers also have a few notable features, including UV inhibitors on the housing, bottle openers, cup holders, fish rulers, and a lockable lid. The 70QT cooler additionally has tie-down loops and comes with a wire basket.

The design of IMX coolers is also pretty cool, especially in the IMX 70QT. Igloo IMX coolers look futuristic and very unique, and this is thanks to the benefits of injection molding. You probably won’t ever find rotomolded coolers that look like this.

The colors are a little limited – only tan/black & white/gray – but we think that the unique design makes up for this. 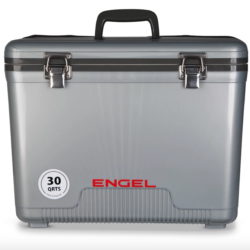 If your budget is extremely limited or/and you are ready to ditch any features for maximum weight savings, then ENGEL Drybox-series coolers are for you. These coolers are extremely inexpensive and basic, and they will work if your demands aren’t too high.

These weights are the lowest on the list, which is yet another reason to go for Drybox if you want a light ice chest. The smaller coolers are also very compact, so they are a good choice if you have extremely limited storage space.

What we also like about Drybox coolers is that they are extremely portable – this is thanks to not only the lightness but also the integrated shoulder strap.

On the other hand, don’t expect exceptional durability and insulation from Drybox coolers. They are day coolers – if you do everything right and use good ice packs or block ice, you may even get 2 days out of it, but probably not more.

In terms of features, ENGEL Drybox coolers have nothing fancy to offer. They don’t have tie-down slots, fish rulers, bottle openers (though you could perhaps use the latches as such), and other bells & whistles that the previous coolers had.

The only notable feature in these coolers is the hanging accessory tray. Still, they're pretty well-thought-out products, well suited for any occasion when you don't need to carry a heavy-duty rotomolded chest along with you (e.g. Sunday morning fishing trips). It's not surprising, therefore, that they've got so many 5-star user reviews.

Get the Drybox cooler at Engel's store >>

Igloo BMX Coolers – The Best Light Cooler if on a Budget

Finally, we have Igloo BMX coolers – even cheaper and lighter coolers than the IMX ones reviewed earlier.

But what’s the catch here? Well, BMX coolers are made with blow molding – a cheaper technology than injection molding.

Blow molded coolers are less durable and have worse insulation than injection molded ones. Don’t expect igloo BMX coolers to withstand impact well and retain ice for days – you’ll probably get about 1-4 days tops for the smallest and largest BMX, respectively (which will allow them to work as weekender coolers).

With that said, how much lighter are BMX coolers exactly than IMX? Here are the numbers:

BMX coolers also have a pretty cool and distinct design. We don’t like it as much as the design of IMX coolers, but it still makes BMX coolers quite the eye-catchers.

Feature-wise, BMX coolers have most of what you are getting in IMX coolers, but they lack some things. Most importantly, BMX coolers don’t have lockable lids, drain plugs, cup holders, or bottle openers.

However, the smallest BMX 25QT cooler has tie-down loops, while IMX 24QT didn’t have them.

All in all, expect igloo BMX coolers to have the lowest durability on this roundup. These light ice chests certainly aren’t for heavy use – they won’t take bumpy roads well and won’t tolerate accidental drops. We’d say that camping trips would be too much for these coolers.

However, if you are looking for a cooler for light use cases – like picnics in the park or a backyard party – Igloo BMX probably would be the best option out there.

Find out more in Igloo's store >>

The best lightweight cooler isn’t the one that is the lightest on the market – for you, it would be the one that is light enough while making sure that your needs are met.

So when shopping for the best light ice chest, don’t only pay attention to weight – consider other features as well.