Did you ever wonder who invented the cooler? In today's post, we're not going to review any new ice chest, oh no. Today it's time for a different story to share, so what we're going to do now is to take you through the history of coolers.

The Brief History of Coolers – A Word Of Introduction

Before we dive in into the cooler history…. when you think about coolers, what do you see?

For many of us, coolers evoke images of summer and the sunlit beach. They make us think of tailgating parties and wonderful picnics. They make us want to go out hiking, or camping, or fishing.

They invite us out to explore nature, knowing very well that we don’t have to worry about the comforts that we leave at home.

Because coolers allow us to bring along those comforts with us. They make it possible for us to enjoy a cold drink, or a warm one, and to keep our food fresh, without having to wonder how it’s all going to be possible. 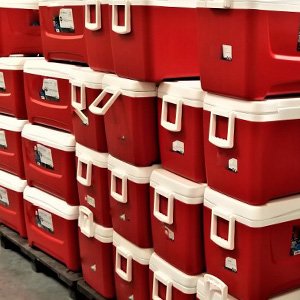 One of the interesting things about home, the things that make it a haven of comfort, is the fact that many of us can look forward to the prospect of waking up in the middle of the night and go to the fridge for a little snack. Perhaps that is the epitomization of home comfort.

With coolers and their simple but wonderful technology, all of nature can now be our home. We can think of it in almost the same way.

So, Who Invented the Cooler?

On our blog, we’re always looking for the coolest coolers to show you so you can purchase better products, with all the right features that meet your needs.

But have you ever wondered where this idea came from and who invented the cooler?

We’ve always been obsessed with coolers, and dug deep from an early time to find out their history. But we just realized we’ve never really shared our knowledge of that with our readers.

That’s exactly what we’re going to do today. So fasten your seatbelt and brace yourself for a journey through time. I daresay the coolest journey you’ve ever been on! 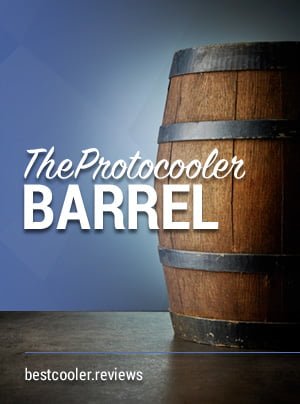 While the history of the modern cooler starts somewhere around World War II, the whole idea of keeping food and drinks fresh for long-distance transportation (or for preservation for a future time, even where transportation did not happen), has been around for thousands of years.

The Romans were the first to use wooden barrels for food storage, and they endured in this role, making lots of things possible, such as world exploration by boat after the Renaissance.

Captain James Cook, for example, used oak barrels to store dried fruits and other foods during his voyage to New Zealand in 1770, making it possible for the sailors to reach the new land without dying of scurvy and other deficiency-related ailments.

Merchants also used them to store different commodities, including beer, wines, and spirits, when they went out to trade with other countries.

The First Ice Box and the President Jefferson Connection

Despite all the advantages that barrels brought to international commerce, they weren’t very good at the job of insulation, which is the one job that you have to do well to keep things cool and fresh.

This particular challenge, that of insulating, was faced by a farmer from Maryland named Thomas Moore. His homemade butter needed to make it to the local market without going bad, and he had to figure out a way to transport it. What he came up within 1802 was an oval tub, which he called “The Refrigeratory”.

The Refrigeratory was made out of cedar wood, with a rectangular tin box inside it, which would be filled with snow and crushed ice. He then lined the sides of the box in rabbit fur to keep the ice from melting.

This invention got quite popular. So popular, in fact, that it caught the attention of Thomas Jefferson. The president loved it so much he had a large one built for his estate, where butter, meat and ice cream (he really loved his ice cream!) would be stored.

One of the side effects of the invention of The Refrigeratory was that the selling of ice to fill such iceboxes became big business. The idea was also adopted to build ice boxes for railroads that would make it possible to keep food fresh while transporting it around the color, revolutionizing commerce at the time.

In 1944, as World War II was ravaging, Dow Chemical, a chemical products company, was thinking hard about how to find a cheap alternative to imported rubber to support the war effort.

Their answer came in the form of the invention of Styrofoam in the same year by Ray ‘Otis’ McIntire, a research engineer at the company.

He pressurized polystyrene, an already well-known chemical with great durability and insulation properties, and then mixed it with isobutylene.

The result was polystyrene foam, also known as Styrofoam. This material had billions of little air pockets in it, not only making it an excellent insulator but also very light. Combined with the durability and strength of polystyrene, it was the perfect replacement for rubber at the time.

Styrofoam proved to be useful for a whole host of applications, ranging from making little Styrofoam beans for packaging to providing insulation for coolers.

The application to coolers came in December 1953, when Richard C. Laramy from Illinois filed a patent for a “Portable Ice Chest and the Like”.

At the time he worked for Queen Stove Works, a business that designed camping equipment, including stoves, ovens, lanterns, and so on.

The ice chest he had patented used Styrofoam for insulation and was called “Kampkold”. The marketing line used at the time was “your home refrigerator away from home!”

Queen Stove Works didn’t last very long. It was sold in 1957, and the patent for the Portable Ice Chest and the Like was sold to the Coleman Company. 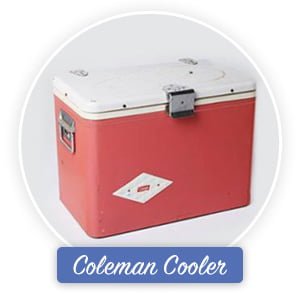 Coleman started making coolers with the new patent and switched the name from the “Portable Ice Chest and the Like” to the more palatable cooler.

The very first models were made of galvanized steel, which was quite heavy. Coleman later switched to plastic, which boosted sales of their coolers and made Coleman popular.

So popular, in fact, that lanterns were all but forgotten and the Coleman brand became synonymous with outdoor products.

TIP: If you want to learn more about Coleman's current offer, we encourage you to read this post. It's also worth taking a look at their retro-looking Steel Belted cooler.

Over time, other brands picked up on the success of Coleman and started building their own coolers.

One of the earliest was Igloo, which had been around since 1947. Once Igloo started selling ice chests they never stopped, and today they have over 500 models, including such novel models as the Playmate, which even made it to an appearance on Wall-E, the 2008 animation film.

It’s interesting to note that, parallel to the cooler revolution, the advertising revolution was happening as well, and many companies discovered the power of coolers when it came to advertising.

Some of the first coolers branded in this way are now often traded as collector’s items.

Rotomolding and the Yeti Revolution

In 2006, two brothers named Roy and Ryan Seiders noticed that their cooler wasn’t nearly as durable as their boat. It did the cooling job well enough, but it couldn’t handle them standing on it, which they needed to do to make their fishing more effective.

To solve this problem, the brothers looked into the process by which their boat was manufactured, called rotational molding, or rotomolding in short.

The process involves heating a plastic mold with powdered polyethylene added to it and rotating it continuously in order to keep the thickness uniform.

With Styrofoam being looked down upon as insulation material due to its negative environmental impact, they also looked at other forms of insulation and stumbled upon polyurethane, which was not only superior to Styrofoam but also caused the ice to last longer.

They would inject up to 2 inches of polyurethane foam into their ice chests to make for longer ice retention.

From all this, Yeti was born, and it quickly captured much of the cooler market share, with other companies quickly adopting Yeti’s innovations, including rotomolding and the use of polyurethane foam for insulation.

Today, Yeti is the gold standard of the market and has grown into a massive $5 billion public company listed on NYSE with something of a cult following.

Today there are over 40 cooler companies across the country, each trying to differentiate itself from the competition in different ways.

There are lots of innovations that have happened along the way, such as the use of vinyl and nylon to make lunch containers and soft coolers, and neoprene later, which is the same material used in wetsuits (it is waterproof and incredibly easy to clean).

Also the invention of the SolarCooler, which uses solar power to cool its contents, and more recently the Coolest Cooler, which has a waterproof Bluetooth Speaker, USB ports, and various other features.

Innovation continues at a rapid pace in the world of coolers, with many brands and innovators coming up with new bells and whistles to add to their machines.

However, the fundamental principles of insulation and manufacturing processes remain largely unchanged, with age-old wisdom seeming to prevail.

That doesn’t mean it won’t be innovated away in the future. It probably will as brands continue to find ways to differentiate themselves.

We’re happy to be curious spectators to the process, and even happier to share what we find with you, our dear reader.

We look forward to a future just as exciting as the history that has gone by, and we’ll do our best to share all the details with you as they arise.

Until next time, stay cool!