niCE coolers (formerly Meadowcraft Coolers) are an interesting brand, to say the least – we stumbled across them just a few months ago from a friend down in Florida who tipped us off to ‘some new rotomold company out in Alabama’… and being the nerdy cooler wizards we are, we had no choice but to take a closer look and check them out for ourselves in this in-depth nICE Coolers review.

Having seen and tried out pretty much everything out there, for better or worse we’ve become a little jaded and are admittedly a bit skeptical whenever any new premium cooler hits the market nowadays.

However, before even digging too deep into the construction and design of the things, nICE's lineup earned some points in our book just based off looks and aesthetic design alone. 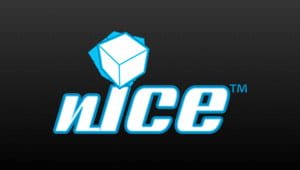 And once we did roll up our sleeves and take a good look at construction, engineering, and performance, we found the coolers to be chock full of integrated, well-designed features – a breath of fresh air in a world increasingly full of coattail-riding junk.

Needless to say, we didn’t have any hesitation about giving the brand some fully-deserved coverage here on our site, in the form of a complete review.

Although the coolers are actually made in China, as far as we know they’re wholesaled out of Meadowlawn’s distribution warehouse in Wadley, Alabama, and as of the time of this writing are well-stocked and ready for shipment.

nICE Coolers are designed, constructed, and marketed as ultra-high performance coolers in the same mold (not literally … no pun intended) as YETI (more on Yeti here), albeit substantially less expensive.

First, let us be clear that some of these YETI imitators over the years have gone on to see great success and have equaled – or even surpassed – YETI in terms of performance (see Cabela’s Polar Cap, RTIC, etc), while other lesser-quality imitations are better off sitting on the shelf down at the local dollar store.

Based on the experience we have with them so far, nICE Coolers definitely belongs in the former group; fantastic durability, good build quality and ice retention, and yes, they really are about half the price as YETI’s.

Like all premium rotomolded coolers, nICE ice chests are built with a thick, ultra-durable polyethylene body that sandwiches about 2” of high-density insulation foam throughout – the absolute key to success for prolonged ice retention in harsh conditions.

TIP: Check out how to increase ice retention using some of the best ice packs or dry ice.

While it was clear just by doing a quick once-over that the nICE build quality was up to snuff, the thing that really sucked us in and impressed us was the well-designed array of integrated features – not a single one of which felt under-built or out of place.

We’re heard from an increasing number of people now how the nICE cooler lineup is as good performance-wise as any other premium rotomold out there, but like we said, the thing that really gives them their value is the amount of built-in features that you get for the price:

nICE currently (at the time of writing this nICE cooler review) has three different sizes available and in-stock (20-quart, 45-quart, and 75-quart), each of which is available in five different colors:

In terms of durability, nICE ice chests will hold up to YETI standards – don’t get us wrong.

Like we were saying earlier, our buddy down in Florida uses his as a casting platform on the bow of his boat, and says it’s more than strong enough for both him and his fishing partner, both of which are over 180 lbs. 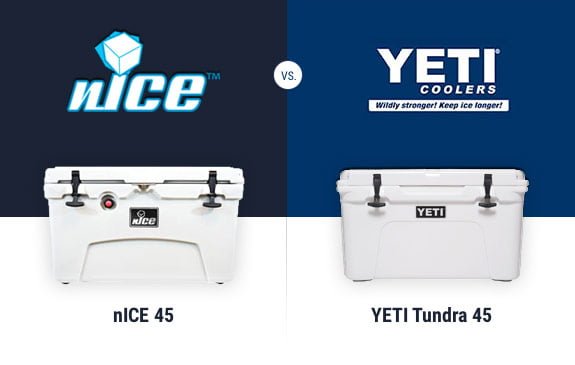 Also, the super-grippy anti-skid rubber feet will make sure that that sucker doesn’t slide around anywhere on the boat deck. (We will say that YETI’s non-skid feet are screwed into the bottom of the cooler rather than glued in, so they’re probably a bit more durable in that regard than nICE).

The main thing we like about nICE coolers vs YETI is that pressure relief valve we were talking about. Even though it looks kind of silly and gimmicky (like those pump tongue Reebok’s back in the 90’s), we love how functional it is and how easy it makes it to open the lid, even after hours of negative pressure.

Oh, another significant improvement that nICE has on YETI is the dermatoglyph layer they’ve incorporated into the non-skid lid, allowing it to be used as a cutting board without having to worry about destroying the whole thing.

Like YETI’s, nICE Coolers also have a threaded drain plug that can hook up to a standard garden hose, but the new guys one-upped the masters yet again by adding a stainless steel chain to the plug – never have to worry about losing or misplacing it.

And last but not least, don’t forget about all the integrated features that are built into the cooler lid (like the cup and rod holders) – none of which you’ll find on a YETI.

nICE Coolers for Sale: Prices and Where to Buy Online

Wondering where to buy nICE Coolers? Yeah, we actually had some trouble too finding a new Seafoam Green 45-quart that we wanted to order.

Our first-choice recommendation is to always check Amazon first, as ever since we’ve been keeping an eye out for them, they’ve had a really good selection of different size nICE's in-stock and ready for shipment, at insanely good prices.

Well, if you haven’t figured it out by now, you could probably say that we’re the newest additions to the increasing swarm of nICE Coolers fans.

Unlike other YETI imitators, these ice chests live up to all their claims of performance and durability, and literally are about half the price of the top-name brands. Definitely a recommended buy in our book.

Check all nICE Coolers at Amazon

In the comments below let us know what you think about nICE Ice Chests,  their extra features and who do you think is a winner in the nICE vs Yeti coolers battle.