Cabela’s announces itself to the world as the “world’s foremost outfitter” and as “the leader in the outdoor equipment business.” To be the best you have to give the best. So, I decided to put together this Cabela's cooler review to see if the foremost outfitter makes a cooler worth its weight in ice.

Cabela's has been around since 1961 when founder Dick Cabela started selling fishing lures through mail order. From there Cabela's has grown to be a go-to source for almost any gear that the outdoor enthusiast needs to conquer the wilds.

Recently, I had the opportunity to spend some time in a local Cabela’s and got to check out the line of Cabela's coolers. In the rack, they sat next to other popular coolers like Yeti, and their form and design stood out to me from the others. After my visit, I dug deeper into what makes the Cabela's ice chests chill.

Cabela’s offers the Polar Cap Equalizer hard cooler and a line of soft coolers to keep your delicious tasties perfectly chilled while out exploring, or keep your catch cold after a long day on the lake.

To kick off our Cabela's cooler review, I want to give you a rundown of the Polar Cap Equalizer. The hard cooler line of Cabela's ice chests come in tan or white and gives you the option to pack 24, 40, 60, 80, or 100-quart coolers out with you as you make the wilderness your playground. 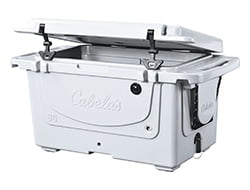 Cabela’s primary goal in designing the Cabela’s Polar Cap cooler was to create an ice chest that had an equal balance of weight to cooling power. Their philosophy is that a cooler shouldn’t weight a ton just to keep your ice solid and your drinks cold.

While Cabela’s ice chests aren’t feather light, they do have an excellent weight to quantity ratio. The 100-quart cooler only weighs 47-pounds. The little guy in the Cabela's line-up, the 25-quart, only weighs 18-pounds.

The Polar Cap has a freezer-grade gasket that creates an airtight seal with a closed lid. The airtight seal keeps the cold air in and doesn't let warmer air from outside the cooler from creeping in and taking the frost away from your cans.

The lid is strapped down to the body with heavy-duty rubber latches. As a bonus, the latches include integrated bottle openers to let you pop open your drinks without missing a beat.

Between the outside plastic and the inner goodies is a thick layer of temperature controlling foam that acts as a shield against hot temperatures.

Across the bottom of the cooler are elevated feet that increase the flow of air around the body of the cooler, while limiting the amount of heat that can build up below an ice chest sitting directly on the ground.

Other little features include molded-in handles that let you grab onto the cooler securely without having to worry about extra space needed to accommodate them. Plus, the hinge-less design minimizes areas of weakness in the construction.

Where the Polar Cap does have a hinge, Cabela's has elected to build a molded-in lid hinge that is supported by aluminum connecting rods. This triplicate of design features gives this line an impressive level of durability and lasting power that will keep you traveling fully-loaded for years to come.

So it has a bunch of fancy features with cool names, but how does that translate to keeping things cold? Well, Cabela's Polar Cap Equalizer is built for the long haul. I'm not just talking about an afternoon of basking in the sun.

The smallest cooler in the Polar Cap family keeps ice solid at room temperature for a stunning 5 days. The 40 and 60-quart coolers hold for 7-days. The big dog 80 and 100-quart models have ice retention for an incredible 12-days.

The cooler keeps cool thanks to the tight seal created by the latches and the freezer-grade seal. The seal can become super tight when firmly closed for an extended amount of time.

To help make opening easier, Cabela's has built a pressure release valve into the body of the cooler. The valve eases the pressure away from the lid to allow you to pop open the cooler to get your goods out.

Keeping cold may be the primary duty of the Polar Cap Equalizer, but the build of this ice chest is equally as impressive as its ability to keep your drinks cold.

Cabela's Polar Cap Equalizer is certified bear-resistant by IGBC. That means that if you accidentally leave this cooler out in the open while camping out, a hungry bear won't be able to pop this cooler like cardboard and steal your delicious hero sandwich. In case you run into a bear with the intelligence of a dinosaur from “Jurassic Park”

Cabela’s ice chest also has an incorporated padlock latch to prevent Mr. Smarty Bear from popping the latches on your cooler.

Cabela's Ice Chest – A Bit of an Honest Opinion

After throwing a bunch of build and performance specs your way, it’s time to give you some of the actual use I found while doing my research.

While the weight of the coolers is good for how well it keeps things cold, the extra thick body of the cooler, and the molded handles make these coolers take up more space in your trunk or bed than some similar coolers on the market. While the bigger handles make, the cooler easier to haul, even by yourself, the extra wingspan becomes cumbersome when packing it into the car.

The other downside of the thicker walls and fatter body is less internal space. For example, the 25-quart only has interior dimensions of 15x10x11 inches. That makes the volume only 1,650 cubic inches. That is smaller than your average camping backpack.

That means that you can only hold about a 12-pack of cans while still saving room for ice and snacks. If you leave out food and use less ice, you could up the amount to around 20 cans. Of course, 12 refreshingly cold cans are better than 12 mildly cool cans, so the lack of space isn't a complete downer.

The Truth Behind the Rating

The testing on these coolers was done at a standard room temperature, and regular store bought ice.

This means that using store-bought ice in ideal conditions, without frequent opening and closing, you can have solid ice for up to 12-days. In practical use, though, the larger coolers will max out at about a week. The smaller coolers will still give you 3 to 5 days as long as you don't leave the cooler open for long periods or subject it to high external temperatures.

Cabela’s documentation backs up the actual use:

Actual ice retention may vary depending on many variables such as ambient temperature, how often the lid is opened and closed, what the temperature of the product placed into the cooler is, etc.

All that said, the Polar Cap Equalizers still do a fantastic job of keeping everything crisp and refreshing.

Just in case you want a lighter duty cooler that is good for those quick day trips, or you want a bit smaller option to keep your bait cool, with enough space for a few drinks and lunch.

Cabela’s soft coolers use a durable PEVA lining. PEVA is a non-toxic lining material that has the properties that needed to resist damage while keeping all your precious frosties fresh for your day full of fun.

The outside of the soft coolers uses a combination of 600-denier polyester coated with PVC to make a thick and seriously tough outer lining. You can toss this puppy in with the rest of your gear without being afraid of it ripping and tearing along the way.

Like the line-up of Polar Cap Equalizer cooler, Cabela's soft coolers have an excellent range of capacities to fit just about any need. Unlike the other cooler, though, Cabela's labels the soft coolers by the amount of 12-ounce cans they can carry.

You can pick from 30 can, 18 can, and 12 can capacities that come in a variety of colors including camo patterns You wouldn't want your cooler giving away your location in the woods after all.

In addition to the main pocket, the soft coolers have three additional pockets to hold more than just cold stuff. The zippered front pocket and mesh pockets located on either side of the cooler are great for bringing along utensils, knives, napkins, or for stowing your phone and keys while out on the water on in a blind.

When you get a soft cooler, you know that you aren't getting the multiple days' worth of ice retention, so you need to plan activities that will have the cooler keeping things cold for a day at the longest.

As I went through different uses of the soft coolers, I found that they were quite a popular choice for using as a lunch bag (more lunch coolers here).

This 12-can size is excellent for a lunch bag. The larger sizes are excellent for packing in food for you and your buddies. I like using this 30-can size camo bag to pack along condiments, so my bread doesn't get soggy along the way.

The cooler is also a great option to bring along empty when fishing to pack home your catch. When combined with a solid ice pack (find best ones here), the cooler will stay cold enough to get you back home or to a campsite when you can clean and prepare the fish for the evening cookout.

Cabela's does make one of the coolest small coolers I have seen. They have a tube-shaped neoprene “Sling Cooler“, available right here, that lets you throw a six pack over your shoulder. The sling cooler is a lightweight, functional, and downright cool idea (more like that here).

When you look at the shelves of Cabela's store, you will see a wide variety of cooler brands. Among them is Yeti Tundra (our review here), the brand that is widely considered to set the standard for heavy-duty cooler excellence. I wanted to enumerate how well Cabela's coolers stack up against the king of the ice chest mountain. 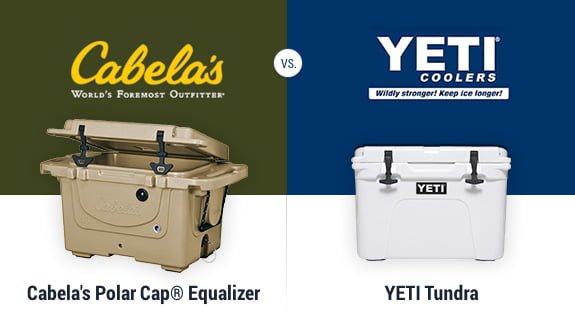 I can easily wrap-up the Cabela’s cooler review by directing you to Cabela’s well-earned reputation of providing high-quality outdoor gear. They don't slack in the building coolers that readily stand up to the competition in reliability, durability, and performance.

>> Check Out All Coolers Available on Cabelas.com