We’ve all faced that dilemma at some point, where we have to decide what kind of cooler to buy and there is a sea of options lying before us. We stare into the abyss, the abyss stares into us, and it sees just how confused we are.

Okay, that may have sounded a little dark, but it demonstrates how difficult it can be to make a choice when you have a plethora of options before you.

It’s one thing to have a ton of options when all you’re looking for is a soft sided cooler or a hard sided one.

If you’re an avid reader of our reviews then you probably already know that there are plenty of options either way and it’s easy to get caught up in all the analysis paralysis.

Today, we’re going to try and help you out of that conundrum.

The most important determining factor when deciding between a soft sided cooler and a hard sided one is how you plan on using the cooler in the first place. Sure, both do the same job: they keep things cool.

Perhaps the best way to gain some perspective and make a better choice is to have an in-depth look at what each type of cooler is used for and what are their unique characteristics. 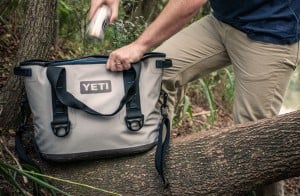 These coolers are highly versatile and perfect for use on a daily basis. This is the kind of cooler you take with you to the sports field, to the gym, to work, to school, to your fishing trip for the day, the golf course, and so on.

They’re called soft coolers because they aren’t made of hard plastic. However, we like to think of it from a slightly different dimension.

They’re also soft-sided coolers because they are perfect for the “soft” side of your life; the side that doesn’t need a heavy-duty cooler designed to withstand the harshest conditions and keep your food and drinks cold for the longest time.

That said, there are a few unique characteristics that all soft sided coolers have:

Soft-sided coolers are much lighter than hard-sided coolers. The exterior is typically made of fabric or vinyl and weighs much less than the rotomolded plastic you see on hard sided coolers.

They are also much smaller on average, meaning they have a smaller capacity than hard-sided cooler. Most of the weight will come from what you pack the cooler with.

With such little weight, lugging a soft-sided cooler shouldn’t be hard work and that’s part of the reason why they are so perfect for everyday use. That brings us to the other unique characteristic you will find with soft-sided coolers. 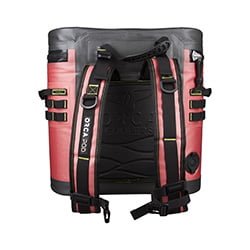 This is a great draw for soft sided coolers. Part of it is because they are lightweight. The other reason why they are so portable is the fact that they come with handy shoulder straps.

A soft sided cooler looks like a regular back pack on the outside. You can carry it around like you would a rucksack or a back pack and the weight will be evenly distributed on your shoulders.

Unlike hard sided coolers, which typically need you to have some kind of vehicle for long distance transportation, soft sided coolers will go with you pretty much anywhere. Since they are strapped to your shoulders, they also leave your hands free to carry anything else you might need to carry. That is what makes them so convenient.

Soft Coolers are Easy to Store

A soft sided cooler, on the other hand, can easily be folded or rolled up for storage, which means it will take up a lot less space when empty than when full.

Examples of Soft Sided Coolers we have reviewed:

Hard sided coolers are the other side of the coin. They are a great option if you’re going to be rugged environments or need a cooler that will last you especially long when you’re going on those extended trips. Here are some of their characteristics. 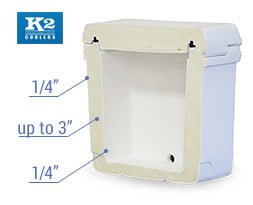 Hard Coolers have much greater Capacity

Soft sided coolers are designed to be light and portable. That means they will naturally have a limit to how much they can carry. Carry too much and it will begin to look impractical to carry a soft sided cooler on your back. A hard sided cooler, on the other hand, has no such limits. 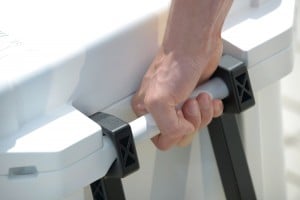 Examples of Hard Sided Coolers we have reviewed:

If you're looking for the best bang for your buck, you might want to check out our full list of cheap roto-molded coolers.

As you can see, the decision boils down to your needs. Factors such as capacity requirements, extended trips, environmental conditions, and ice retention requirements should help you figure out which cooler is best for you. That said, make sure you go for good cooler brands (like Yeti, Pelican, Orca) whether you want a hard cooler or a soft cooler.