How To Maximize Ice Retention: Keeping The Ice Icy For Longer

The whole point of a cooler is to keep your things cold. It’s inherent in the name! That’s why we’re always reviewing coolers here, looking for those that perform better than others.

Sure, we look at a bunch of features, such as the design of the lid, or the body, or how the locks are designed, and so on, but most of these features are just there to make sure the cooler retains your ice longer.

Ultimately, if we found a plain cooler without any bells and whistles that still managed to retain ice for 18 days, and another with bottle openers at every corner, the most comfortable handles, great color options, and so on, but only retained ice for a maximum of 3 days, we’d go for the plain old ice box without asking any questions.

That said, even if you get the cooler with the best ice retention in the market, it’s still important to do your part to make sure it retains the ice for as long as possible. If you don’t take care of it, or apply some simple tricks which we will tell you about today, your cooler will not perform to its maximum potential. Ice retention is a collaboration between you and your cooler, so you should be willing to do your part. Are you ready? Here we go!

I know, that sounded a bit weird when you read it out loud, but it is one of the biggest favors you can do for your cooler. If you put ice into a warm cooler, then a part of that ice will be consumed in trying to warm the cooler itself. That is valuable ice that you could have used to keep your food and drinks cooler for longer. 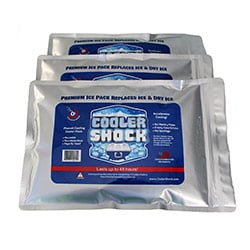 Pre-cooling your cooler, especially before a long distance trip to a destination with a harsh environment, will ensure your cooler can retain ice for much longer. Sometimes, it can add up to a day of extra ice retention.

All you have to do is put in some sacrificial ice packs in your cooler for at least 24 hours before the big day. By the time you’re getting your cooler for the real job, it will be cold and ready.

For more details, refer to our other post where we compare various ice packs.

The Ratio of Ice to other Contents Matters

You need a lot more ice in your cooler than the actual food and drinks you’re looking to cool. That’s because the ice needs to surround your food and close in any air spaces.

When packing your cooler, a good ratio of ice to other contents should be about 2:1. That means that, if you’re filling your cooler all the way to the top, a third of the cooler should have your drinks and food and 2 thirds should be ice.

For maximum cold, layer the ice between the other contents. The ice should be at the very bottom, followed by alternating layers of food and ice in the middle, followed by ice at the top.

The Drier the Ice, the Better

Ice actually has varying temperatures. We have warm ice at 32 degrees Fahrenheit on one end of the spectrum. It doesn’t last very long and is characterized by being extra wet. On the other end, we have cold ice, which has a temperature below the freezing point of water. That ice is much drier and lasts a lot longer.

Alternatively, you can do away with water ice altogether and get dry ice, which is derived from carbon dioxide. This ice has a temperature lower than the freezing point of carbon dioxide, which is much lower than that of water, and so is much colder. Assuming you don’t open your cooler too often, it also lasts longer. Note that you should only use dry ice if your cooler is dry ice compatible.

Don’t open your Cooler too often

Every time you open your cooler you let in a little warm air that then needs to be cooled. That means some ice will be consumed every time, just to make sure the warm air is chilled to the same temperature as the air inside the cooler. If you open your cooler too often, your ice retention time will go down. Make sure you only open the cooler when you really need to.

Keep your Cooler away from the sun

The last thing you want is your ice being consumed trying to cool down the cooler itself, rather than the contents. As a result, you should always keep your cooler in a shaded area when you’re out in the open. You can even place it in the shade of the north facing side of a tree if there isn’t any other shade around.

Reduce Air Circulation to a Minimum

The real enemy inside your cooler is air. When there are air pockets, then the ice gets consumed trying to keep them cool. You should, therefore, fill up your cooler as much as possible with ice to get rid of these pockets. If you’re worried about weight, you can even stuff newspapers in the spaces between the ice packs.

Here you might have to do a tradeoff. Cubed ice will get the contents of your cooler cold much faster. They will, however, melt much faster as well. Blocked ice, on the other hand, will melt very slowly. If what you’re looking for is ice retention, then use blocked ice. If you can’t get it, frozen water bottles will do.

nICE Cooler Review: Bang or Bust? And How Does it Compare vs Yeti?

Igloo Recool: This Biodegradable Cooler Might Just Be What The Industry Needs

Orca Vs Yeti – The Coolers Debate Is Heating Up