Welcome to our very own Engel soft cooler reviews. At bestcooler.reviews, we have always had a soft spot in our hearts for Engel coolers. We have reviewed them before and we immediately fell in love with the hard coolers from this 5-year-old company (and electric ones too).

In fact, we compared Engel to Yeti and said that choosing between the two would be akin to choosing between a Ferrari and a Lamborghini. Either way, you know you’re getting something superb that will make you the envy of all your friends, family, and even a healthy amount of strangers!

We loved Engel’s hard coolers. We were mesmerized! The question now is: will Engel soft coolers mesmerize us just as much? Well, that’s why we’re here today. We’re going to look at their two premium soft coolers and find out if they also have the Engel magical touch. Or should we call it the “Engelic” touch?

Engel went really hard on this one and what they came up with is nothing short of a marvel of engineering. So we have something that, on the surface at least, is a soft cooler. However, when you take a closer look, you begin to realize that it isn’t just a soft cooler. It is quite legitimately a soft cooler like no other.

Engel really separated themselves from the competition with the HD30 and the smaller HD20. For starters, the HD coolers are welded all over. With many inferior soft cooler brands, you get a soft cooler with seams.

That isn’t very good because some of the warm air will find its way in and affect the life of the ice or ice substitutes inside. Additionally, you’re going to have to worry about leaks the whole time.

With a completely welded soft cooler, on the other hand, you neither have to worry about leaks nor the entry of warm air into your cooler. You get a much better soft cooler with much better ice retention.

This is a little like the soft cooler version of the difference between a rotomolded hard cooler and a hard cooler molded-in parts. The result of such a superior soft cooler manufacturing technique is that the Engel HD30 keeps your items cold for 3, even 4 days in temperatures as high 90 degrees Fahrenheit.

The 4-day claim is according to the Engel website. We did an independent check and our cooler retained ice for 3 days a few hours, which quite frankly is still superb performance. You don’t get a lot of coolers of the HD30’s size that perform that well.

In fact, we named Engel HD30 the best soft cooler for ice retention in our post dedicated to all those high-performance coolers.

Another win with the HD30 cooler bag has to be the outer shell, which seemed to be engineered to survive a war zone, rather than the relatively milder environment it was built for.

The outer shell consists of some pretty tough fibers; 840 deniers to be exact, and what that means is that you get maximum resistance against any scratches or abrasions as well as the strength that prevents the fabric from needlessly tearing.

You couldn’t rip this bag with your hands in a million years, and we suspect even a bear’s claws couldn’t get through it. But the strengthening of the bag doesn’t even end there.

There’s lamination on the front and the back, done with Thermal Plastic Urethane, or TPU. The film makes it extra strong since it is highly resistant to punctures and tears. Moreover, it is also waterproof.

On the inside, we have just as many marvels as on the outside. The insulation on the inside is closed-cell foam insulation. This is a powerful kind of insulation that prevents air from leaking in (warm air leaking inside is the death of any cooler) and makes the cooler do better in a wider range of outside temperatures without having its internal temperature compromised.

The zipper too is quite remarkable. It is welded in and fully waterproof. It also uses a silicone-based lubricant, which means you don’t have to buy regular lube to get it to function properly.

In fact, in a move that is characteristic of a premium brand like Engel, the bag comes with some silicone lubricant that you can use on the zipper when it needs lube. It will be a long time before you need it, however, because silicone-based lubricants are some of the longest-lasting in the market.

The HD30 cooler has a reasonable capacity of 32 quarts, meaning it is just large enough to carry drinks for a whole day and yet light enough to be carried on a long hiking trip. The smaller HD20 has capacity of 22 quarts.

You also get the choice of carrying it with a single padded shoulder strap or tote handles for slinging over the back.

There are also the little details that tell you Engel was being really thoughtful when they designed this cooler. They put in an integrated bottle opener so you don’t have to carry a whole other bottle opener. They also added a new kind of vacuum valve technology with the patent pending.

It’s supposed to allow you to use a vacuum to suck out any extra air before the first time you use the cooler to make it perform even better than it already does! These guys seem to think of everything!

Finally, if you need any extra storage space, especially for your dry goods, you can use the front pocket, which also happens to be water-resistant. 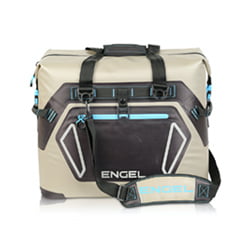 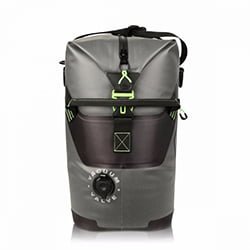 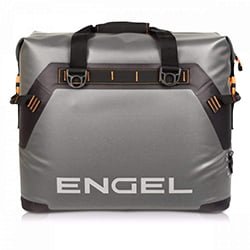 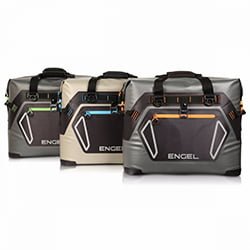 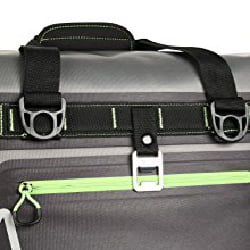 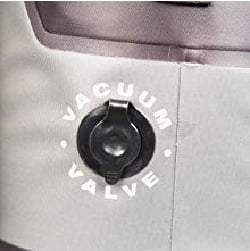 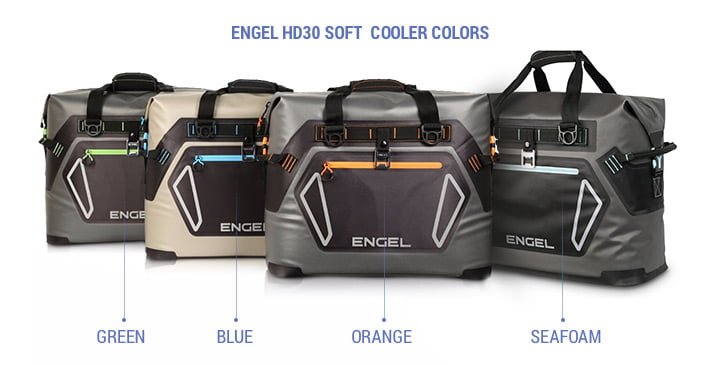 Here's the video featuring the vacuum valve in the Engel HD30.

It’s ripstop so it’s highly resistant to tearing. We should also point out that it has a waterproof coating to make it super easy to clean the back when you get back from your adventures.

The inside is also pretty remarkable. There is some reflective foil on the inside to prevent sunlight from warming up the contents and it sits right on top of a one-inch thick closed-cell foam insulation layer. This is actually a feature unique to an Engel product. You won’t find it on any other soft cooler out there. We know. We checked.

The insulation layer is there primarily to prevent the transfer of heat, especially via warm air, into the inside of the cooler. Meanwhile, the barrier liner reflects light and heat rays from the sun and bounces them off to make the interior even more effective at maintaining cold temperatures.

Because of that, this backpack is capable of keeping your drinks cold for between 2 and 3 days. Pretty good if you ask us!

We should also mention that there used to be a removable liner for this backpack in models older than 2017. In the new model, the removable liner isn’t there anymore since it’s been replaced with a new and better TPU liner. If you own a model older than 2017, you will also notice that the liner doesn’t fit in any of the models from 2017 onward. 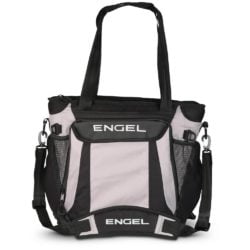 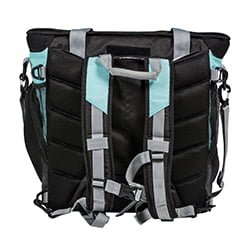 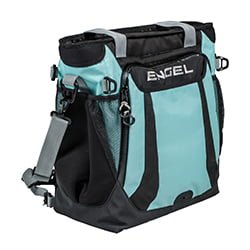 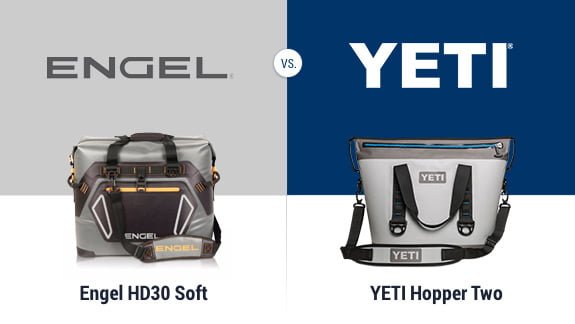 Our opinion is that in terms of the performance and the overall quality, it’s a pretty close race. Usually, at this point, we point out how YETI has more variety in terms of size and color. In this case, Engel matches that, especially when it comes to color option.

In terms of the aesthetics and the overall look & feel, both products look just different. While Engel's bag appears to be sporty, the Hopper Two looks more elegant, at least by our subjective judgment.

We also talk about Yeti’s ice retention being a little better. Engel matches that too. The only thing we can see Yeti winning at here is the customizability of their soft coolers, which is better than what you would get with Engel due to the large ecosystem of third-party Yeti products on the market.

Ultimately, we think it’s a tie between these two brands when it comes to soft coolers. Yeti is an industry leader and die-hard fans will always buy a Yeti. However, if you aren’t already biased in that direction, we suggest you try out the HD30. You won’t regret it. You can check the pricing and the features and see which one gives you more bang for your buck.

So which other alternatives exist to the HD30, apart from Yeti? 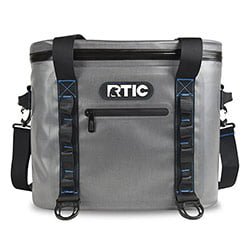 We’ve reviewed RTIC softpak before. It comes with zipper lubrication, just like the Engel, and has a fairly strong build. Not as strong as the HD30, but pretty strong. The closed-cell foam insulation is 2 inches thick, which is about the same as what you find on the Engel. 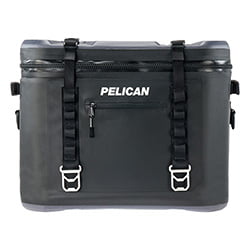 We’ve covered these ones as well before. Pelican soft coolers come in 3 sizes, with the largest being 50 quarts large, which means they have a slightly wider range than the Engel HD30. The exterior of the Pelican is also 840 denier TPU, which makes it slightly tougher than the Engel.

It’s also built to withstand just about any kind of shock and has cords that allow you to secure it firmly in your vehicle. They also come with bottle openers.

The Engel beats them when it comes to color variety and design though. In this case, we will have to admit that the Pelican soft coolers are slightly better than the Engel. In this case, you’re going to have to decide which features you’re really going for and take the cooler that gives you more value for your dollars.

Check our Pelican Soft cooler review or get it at Amazon.

Where to buy Engel Soft Coolers

You can buy them just about anywhere online as well as offline. We, however, think the best place to buy your Engel soft cooler is at their ENGEL's official store.

Alternatively, you can get them at Amazon. In both stores, you'll be able to read real reviews by real customers giving unbiased opinions about the product and so you will be able to make a more informed decision.

And with that, we come to the end of our Engel Soft Cooler reviews. As you can see, our super brand did not disappoint yet again! We love this soft cooler for its performance and the sporty look, and we bet you will too!

Engel's soft coolers are undoubtedly one of the best soft coolers for keeping ice icy. Everything in those coolers had been well thought out, from the welded seams to thick, industrial-grade foam insulation. These coolers are made to perform, so when it comes to ice retention, they're able to compete with any other cooler out there, including a hard-sided one.