Earth Pak isn’t your regular outdoor and sporting goods company. Whether it’s their signature Earth Pak Dry Bags or their Earth Pak Coolers, like the one we’re going to review today, they’re always trailblazing and setting the trend wherever they go.

The company was started by a pair of friends who needed gear that lasted at least as long as their adventures did.

They took their last $5k of savings and went and started the company in 2015. Today, it has grown into a venerable player in the industry.

The main cooler we’re going to review today is the Earth Pak Loch Soft Cooler with Iceolate Tote. It totally blew our mind and we were excited to tell you all about it.

You would think that a soft cooler that only comes in light grey and forest green would be boring. We certainly thought that when we first checked out this bag.

Of course, as you might imagine, we had our minds blown because otherwise, we wouldn’t be dedicating an entire review to it.

The Exterior and Construction

Let’s start with the construction of the bag. Everything about this soft cooler screams quality. The exterior is among the toughest exteriors we have ever seen.

I think we’ve found something that can give Yeti a run for their money. It’s 500D TPU, which is pretty hard, as far as the Shore hardness scale goes.

With a hardness of 500D TPU, the exterior of this soft cooler will not be eroded by chemicals, or discolored by UV rays, or punctured or scratched easily.

In fact, we did have a good time trying it in every which way we could. We went at it with our fingernails, then graduated to steel brushes, then put it out in the sun, and spilled some vinegar on it. The bag seemed to be doing just fine.

To be fair, one day out in the sun isn’t going to discolor even a weak bag, anyway, but we have lots of faith in this product. We’ve seen nothing but glowing reviews for its durability online.

So that’s all great, but how is the bottom? For many soft coolers, the manufacturers go through great pains to make the exterior really hard, but seem to forget about the base.

Sure, you’ll be carrying this soft cooler around most of the time, but you’ll also need to place it on some kind of surface at one point or another, and that surface may well be rugged and harsh.

If the base isn’t well armored against this, then it’s going to be the first to be compromised in the wear and tear process.

Earth Pak seemed to have thought about this and made the base of their soft cooler abrasion resistant. No matter how rough the surface, it’s not going to easily stress the base of this soft cooler.

On the outside we have hard thermoplastic polyurethane (TPU), which does its job really well. On the inside, we have high density NBR foam.

The NBR foam is very good at insulation and will keep your food and drinks chilled for up to 72 hours.

While 72 hours isn’t the longest in the industry, it’s still pretty decent and makes this soft cooler perfect for short camping and hiking trips.

We actually enjoyed takin it fishing and kayaking, but for other reasons which we’ll explain in a bit.

To help with the insulation properties, they added an IPX-8 leak-proof zipper. This zipper keeps liquids from finding their way out of the bag and air from finding its way in, maintaining the cooler’s temperature as a result.

There are also lots of features that Earth Pak were kind and creative enough to add to the mix. There’s an attached bottle opener that comes with the bag to help you open your bottles and get the party going!

There’s also a spacious mesh pocket in the lid that you can store your personal items in. It’s great for your phone, keys, shades, and other essentials.

In case you want something even more reliable to store your keys in, then you’ll love the MOLLE webbing on either side of the cooler. It’s a really great idea because it provides you with hooking areas for stuff like your keys and all kinds of accessories. We found it very helpful.

The main reason why we favored this bag for kayaking is the set of d-rings that’s been fixed into the base. You can use it to fasten your cooler to your kayak or boat.

That’s something you don’t see with lots of other soft coolers, meaning you’re either going to get a hard cooler or you’re not going to take your soft cooler with your kayaking. Earth Pak were thoughtful here and became one of the few manufacturers to add d-rings to a soft cooler.

In case you’re wondering how easy it’s going to be to carry this cooler, you’ll be happy to know that it also comes with a detachable padded shoulder strap for easy carrying.

It also has double handles closer to the bag if you want to carry it in your hands.

The best thing about this bag, though, is the Iceolate™ Tote.

The idea is pretty simple, and interesting. With a hard cooler, draining water away is as easy as unscrewing the plug on the spout at the base of the cooler. You tilt the cooler on its side and the water drains away.

It’s not as easy to do with a conventional soft cooler, though, because there isn’t a draining spout. Mostly you’ll just have to remove everything and turn the soft cooler upside down.

Earth Pak found a way around that. The inner tote, where you put the food, drinks, and ice, is actually detachable and meshed. You can lift it out of the cooler and let the water pour out into the soft cooler below, which you can then pour out later.

Meanwhile, you can replace the ice in your food and drinks without having to remove anything from your bag. Brilliant! 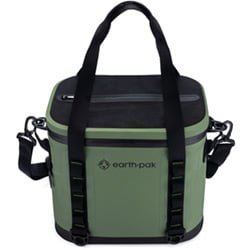 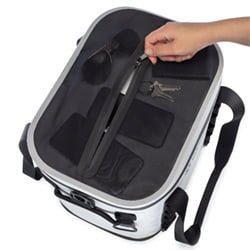 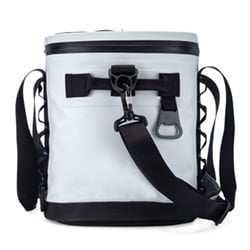 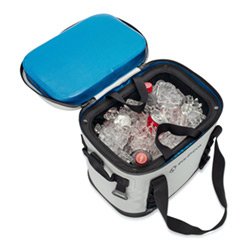 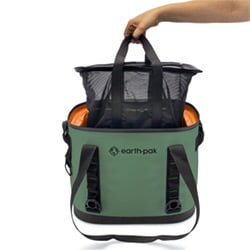 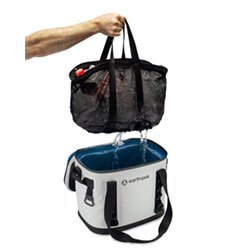 This would be more of a premium alternative to the Earth Pak Loch soft cooler. Yeti is a large brand and has quite a following in the industry.

I would say there isn’t much you’d be getting with a Yeti Hopper Flip that you wouldn’t be getting with the Loch soft cooler, except maybe Yeti’s great customizability options and, of course, the brand name.

So if you’re a die-hard Yeti fan, then get yourself a Yeti by all means. Otherwise, I would stick to the Earth Pak Loch soft cooler.

The original Polar Bear soft cooler is a great comparison to the Loch soft cooler, mostly because they are in the same price range and have many of the same features.

I would say the Polar Bear soft cooler, reviewed here, has more options when it comes to colors, so that’s a win. It’s also slightly larger. Other than that, there isn’t much to leave one as a clear winner here. Preferences dominate.

AO is a reputable company with lots of different soft coolers, which we also reviewed on our blog. They’ve been in the market for a couple of decades now, so they definitely know their stuff.

Their Canvas coolers are a great option if you’re looking for a slightly cheaper alternative to Earth Pak. They also have lots of different colors to choose from ranging from Mossy Oak to Camo.

Earth Pak’s original product, and something they still sell, is the dry bag. A dry bag isn’t a cooler. It’s more of a general-purpose carrying bag.

EarthPak dry bags are built to be super tough and resistant to any kind of abrasion or wear and tear they might be exposed to in the wild.

They’re also typically airtight and leak-proof, allowing you to keep the contents of the bag perfectly dry no matter where you go, hence the name “dry bag”.

These bags have lots of d-rings that you can attach to a boat or kayak in case you want to bring them along with you. They’re practically built for anything.

Earth Pak has at least 4 product lines for the dry bag. There is the Original Series, the Torrent Series, the backpack Summit Series, and the Viewpoint Series.

They each are optimized for a unique feature on top of the original dry bag design.

In case you want something to supplement your outdoor gear, especially if you’re looking for a multipurpose carrying bag that isn’t a cooler, then you should definitely look into their dry bags.

Where is the Earth Pak company based and where are the products made?

Earth Pak is based in the United States, as the founders are American. However, it is not quite clear where in the USA they are based and where their products are manufactured.

They haven’t included this information on their website. We suspect their product are designed in the US but manufactured in China, but this is yet to be confirmed.

What is Prop 65 and why is there a label on the cooler or bag?

Proposition 65, also known as Prop 65, is a California law that requires consumer products to have warning labels in case they contain toxic substances that may cause birth defects and cancer, or at least explicitly point out that they don’t.

For the benefit of its California customers, all of Earth Pak’s products have Prop 65 labels indicating that they have no toxic materials in them.

How many bottles of water can fit in the cooler?

The Loch soft cooler can hold up 20 cans of beer.

Earth Pak Coolers for Sale – Where To Buy?

You can buy the Loch soft cooler on the Earth Pak website as well as plenty of other retailers online and offline.

We, however, recommend that you do it on Amazon. Amazon happens to be the number 1 trusted marketplace online and features reviews and ratings of every product by real users.

You can check out their ratings and reviews here to see if the soft cooler is worth buying (spoiler alert: they love it!).

You can also enjoy some great Amazon perks like same-day delivery and money-back guarantees, especially if you’re a Prime member.

And so we come to the end of our Earth Pak cooler review.

As you can see, this is a great new cooler from a relatively new but still great manufacturer. We think it’s going to grow really fast and gain market share in a matter of months.

We’ve bought our own 🙂 Hopefully, you love it enough to buy your own too!

We really like the design of the Earth-Pak latest invention. These cooler bags are surprisingly well designed, keep stuff inside ice cold for a sufficient time and, what's equally important, do not cost a fortune. What else do you need?